It has seen bales of Chinese silks and barrels of Spanish wine,
whaling ships, Navy cutters, and fishing boats by the score;
Fisherman's Wharf, in its various incarnations,
has been the focus of Monterey's economic life for centuries.

The City of Monterey has seen people from many different countries who journeyed to this beautiful and fertile region forming an intricate tapestry of cultures. Russian, Spanish, Mexican, British, French, Portuguese, Chinese, Italian, Japanese, Scandinavian, and many others came to Monterey to live and work by and on the beautiful Monterey Bay.

Prior to the 16th Century, there were approximately ten thousand Native Americans who lived in the area by the coast from the San Francisco Bay to Big Sur. The Spanish called them Costanoan, but in Monterey, they were Rumsien, as that was the language they spoke. They lived off the natural plants and animals in the area, hunting for bear, deer, elk, sea lions, whales, abalone and otters. Roots, seeds, grasses, and especially acorns were an important part of their diverse diet.

The Spanish began seeking the Northwest Passage around 1542 which they thought would connect the Atlantic and Pacific oceans.  Spanish explorer Juan Rodríquez Cabrillo is recognized as the first Euro-American to see the Monterey Bay, and called it the Bay of Pines or La Bahia de los Pinos.

In 1602, the Viceroy of New Spain, the Conde de Monterey, delegated Sebastian Viscaino, mariner and merchant, to explore the western shore of California. Viscaino was tasked to prepare a detailed map of his findings, and to look for a harbor-haven for the Manila galleons which brought the many goods from the Philippines to the Pacific shores. Viscaino landed in Monterey that year and named the harbor after the Count of Monterey.

In 1769, Gaspar de Portola, a Spaniard, was sent north. In 1770, he located the Monterey Harbor and the City of Monterey was founded. California remained under Spanish control with Monterey as its capital until 1822, when Mexico, declared its independence from Spain and California became part of Mexico.

In 1770, Father Junipero Serra constructed a mission in Carmel, the second mission built in California. The Presidio of Monterey was also built at that time.

In 1845, Thomas Larkin constructed a wharf at Monterey for regular passenger and freight service, with ships arriving four times weekly. Growth of the sardine industry and the need to keep the Wharf in better repair prompted the Monterey City Council to assume ownership of the pier in 1913. At some time during this period, it became known as "Fisherman's Wharf".

After war broke out between the United States and Mexico in 1846, Commodore John Drake Sloat landed at the present-day Wharf. He then claimed California for the Union. Thus, the Marina, Old Fisherman's Wharf and Municipal Wharf II lie in some of the most historic waters in California.

Chinese fishermen arrived in the early 1850's, coming initially for abalone but they also pioneered the California squid fishery. They lived near the cove of Point Lobos at China Point and other areas. By the early 1850’s, there were about 600 Chinese fishermen fishing with flat bottomed boats in the Monterey Bay.

The Portuguese whalers came to the Monterey region in the 1850's, attracted to the area by a big population of gray and humpback whales. Whale blubber was used for lighting oil, soap and candles, but ultimately kerosene replaced whale oil. By 1900, the Portuguese whalers turned to fishing and farming.

In the early 1890’s, Japanese fishermen arrived and focused on abalone and salmon fishing in the Monterey Bay. Before they arrived, abalone was collected by free diving.  It was a Japanese man who first free dived for abalone beginning in the mid-1890's. Prior to that, no one dove for abalone, with the exception of the Rumsien, who were the first abalone divers in the very chilly waters. The Japanese were astonished by the “carpet of abalone” and used hard hat diving with helmets, nets and insulated suits. They started abalone canning and sardine and salmon fishing operations, too. During salmon season in 1909, there were an estimated 185 salmon boats fishing the Monterey Bay, and 145 were Japanese-owned. By 1920, there were nine Japanese companies diving for abalone, providing it to restaurants and markets throughout the county. Prior to World War II, the majority of the businesses on the Monterey Wharf were Japanese-owned.

By the end of the 1800’s, many Italian fishermen also moved to Monterey from fishing towns in Western Sicily. The Chinese then began fishing for squid at night. The Italian fishermen used the lampara net from Sicily which revolutionized the fishing and canning industry and they focused on sardine fishing. Monterey soon became known as the Sardine Capital of the World. 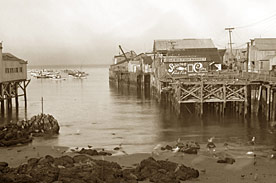 In 1907, a German restaurateur, Chef “Pop” Ernest Doelter, opened a restaurant on Alvarado Street. In 1919, he moved his restaurant to the head of Old Fisherman’s Wharf. Incorporating his knowledge of the wiener schnitzel dish in Germany, he began to pound abalone steaks until they were tender, and then breaded and fried them. creating a very popular delicious and innovative entree.

By 1916, the City of Monterey had purchased the Wharf and immediately began to expand it, providing more services to the fishing fleet and to the freight business. By 1920, the Wharf served as location for warehouses, nearly 20 wholesale and retail fish outlets, a marine service station, a restaurant, and an abalone shell grinding business.

On March 3, 1923, the largest load of sardines ever to be shipped from Monterey, 20,000 cases, was on Fisherman's Wharf ready to be loaded on the S.S. San Antonio. The weather was bad and the San Antonio leaned too heavily onto the Wharf timbers, causing 132 feet of the pier to collapse and spilling 10,000 cases of sardines into the harbor.

In the Wharf reconstruction which followed, 750 feet were added, and a finger pier was built extending eastward from the Wharf. A marine service station was also added. In 1925, City of Monterey officials started a drive for the construction of a new cargo Wharf to meet increasing commercial fishing demands and to relieve congestion on Fisherman's Wharf. Bonds were voted in and a new Wharf (Municipal Wharf II) was completed in 1926. In 1929, Congress appropriated funds for the construction of the present breakwater. The breakwater and its 400-foot extension were completed in 1934. 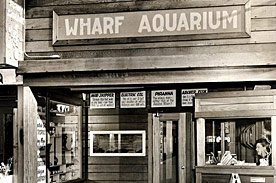 By the 1940's, nineteen fully operating canneries harvested over 250,000 tons of sardines per season. During World War II, the character of the wharves changed. Due to the Japanese relocation to internment camps during the war, the Italian fishermen began to work at and open businesses on the Wharf. At the end of the war, more than 440 people, including novelist John Steinbeck, photographer Edward Weston and poet Robinson Jeffers, signed a petition to welcome the Japanese Americans home. It was published in the Monterey Peninsula Herald on May 11, 1945. Upon their return, some Sicilians hired Japanese fishermen and cannery workers for their sardine operations.

In the 1950's, the demand for a small craft harbor or marina became increasingly urgent. In 1957, construction of a new marina was placed on the ballot, but divided Monterey citizens failed to approve the project until a 20-year, low-interest loan for half the construction cost was obtained from the State. Construction began in 1959.

Upon completion in 1960, the Marina provided 367 berths at a construction cost of slightly over $600,000. A protective sea wall extended from Wharf II to the Marina entrance next to Fisherman's Wharf. The Monterey Municipal Marina was dedicated on September 11, 1960. The berthing facilities were constructed by Granite Construction Company of Watsonville, CA. The launching ramps were added in 1962. 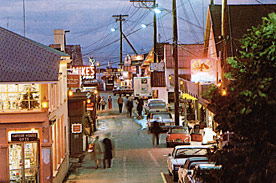 In 1969, a new loan of $325,000 from the State was provided to finance the construction of an additional bulkhead wall, a promenade and additional parking spaces in the Marina area. The G tier with 29 berths was added in 1975. In 1996, a $5,000,000 Marina reconstruction project was finished, and new, wider concrete docks and a handicapped accessible ramp were added. A low-interest loan from the State Department of Boating and Waterways made the project possible. The City of Monterey continues to improve services to customers and public access to the Monterey Bay.

Old Fisherman's Wharf has continued to adjust to the ever-increasing visitor trade. A visit to the beautiful Monterey Peninsula today just isn't complete without a rendezvous with Old Fisherman's Wharf in downtown Monterey. Known as the "Whale Watching Capital of the World" and a top destination of millions of visitors from around the world each year, Monterey's Old Fisherman's Wharf provides a wide array of award-winning dining, shopping, special events, and strolling in a gorgeous setting overlooking the Monterey Bay.

Enjoy salt water taffy, homemade chocolates, caramel apples, cotton candy and many other yummy sweet treats. View sea otters, sea lions, harbor seals, dolphins, whales, sea birds and other wildlife up close and personal that also share the Wharf while you stroll and dine. Throughout the year, there are sightings of 15 species of whales, 10 species of dolphins, 2 species of porpoise, 6 species of pinnipeds and 1 species of Fissiped (sea otter).Watch people who have gone out and caught their own fish on the local and chartered fishing boats return with their own "catch of the day". Celebrate the first location in Monterey County where tender abalone was cooked and served in a restaurant. Come back at the end of January to enjoy the annual Whalefest Monterey event. Check out the many fun shops to find the perfect momento of your visit and a variety of unique gifts. Bring your friends, family, and dogs (on leash) for a wonderful visit from morning to evening. Enjoy the exquisite views and the "best place to walk and people watch" in Monterey County. Situated near downtown Monterey, Old Fisherman’s Wharf is conveniently located along the Monterey Bay Recreation Trail.

Take advantage of the Locals Menus at many of the Wharf restaurants. By showing a local ID with “939” in the zip code to a Wharf merchant to obtain a validation stamp, Monterey County locals can park for free for two hours Monday through Thursday in the parking lot adjacent to Old Fisherman’s Wharf.

Learn more about the history of Old Fisherman’s Wharf during the 1st Sunday monthly Wharf Walks with Maritime Historian Tim Thomas.  For more details, see our Events page on montereywharf.com.

Monterey’s Old Fisherman’s Wharf continues to feature its popular “Enjoy the Wonders of the Wharf” free VIP Card promotion available on the website with two dozen special offers for both locals and visitors.

For more information about Old Fisherman’s Wharf, go to www.montereywharf.com or call 831.238-0777.

Step into the Past via the "Monterey Walking Path of History" at Monterey State Historic Park. The park is a collection of significant historic houses and buildings interspersed throughout Old Monterey. Directly adjacent to Old Fisherman's Wharf is the Custom House, the first government building in Monterey, as well as the nearby Pacific House, Memory Gardens, First Brick House, Old Whaling Station, California's First Theatre and much more! For more information, go to www.parks.ca.gov/mshp.